Things To Do On Waiheke Island 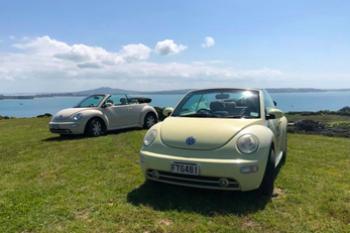 Go Topless on the Island! Explore Waiheke 'island style' in one of our two yellow convertible VW Beetles.  Hit the beaches, find the vineyards, grab your groceries or enjoy a meal out.  This is a great way to get off that beaten track and discover new sites, just like a local!

Book directly at the front desk of Waiheke Island Motel 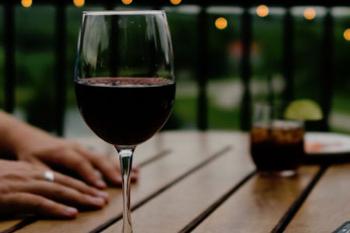 People flock from all over the world to taste the wines on Waiheke Island. In Conde Nast Traveler's Best Islands in the World List. we topped the likes of the Maldives and St. Lucia.  In fact, the wine-lovers paradise was named fourth on the list, chosen by readers of the influential travel magazine. The top three islands in the world, as named by readers, were Palawan in the Philippines, Bora Bora and Moorea, both located in French Polynesia.

Given an overall rating of 84.447, Waiheke was described as:

A mix of Nantucket and Sonoma, with New Zealand charm, the island is a wine-lover's nirvana" 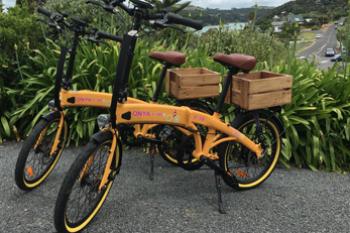 Biking is a great way to get around the island, however we do see a lot of visitors struggling (suffering) with peddle bikes on the hills. So we recommend you hire power-assisted electric bikes. You still get some exercise, and enjoy the ‘green’ way to get around Waiheke, but the bike’s onboard batteries will kick in automatically whenever you need help with those hills. As their advertising suggests “put the fun between your legs.” And best of all they can hired right from the motel at $20 per hour or $60 for the day!

"These made our trip!!! Thank you for making our trip so much fun" - Sunna Kimma via Facebook 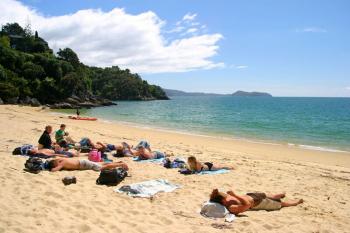 Within 10 minutes drive of the motel are 10 of the island’s most beautiful beaches. Our recommendations are: 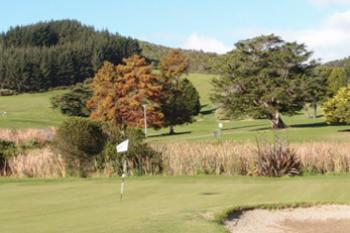 Possibly the most relaxed Golf Club in the country, Waiheke Golf Club was voted Best Northern Region 9 Hole Course. If you’ve always wanted to try golf, but always been too intimidated by the collars and ironed shorts, now is the time to try. Visitors are welcome, young and old, absolute beginners to experienced players. There’s good coffee and wine in the quaint club house, and even a little playground to keep the very young entertained. There’s more holes in the driveway than in the course, and watch out for the ducks at the second hole. Worth a hit. 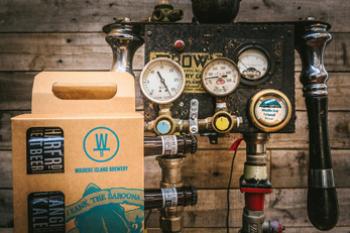 One place which has something for everyone is Wild on Waiheke. While the adults enjoy the wine and beer tasting, the kids can enjoy the outdoor playground and swings. Then everyone can get involved with the Giant Chess, Petanque, Volleyball and Flingo. And if you haven’t had too many wines, everyone over 8 can try archery or laser claybird shooting for $25 each. And we recommend their delicious wood-fired Pizza - great for sharing. 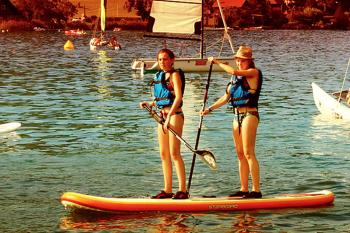 Stand Up Paddle Board

Paddle boarding is the hot new thing on Waiheke right now. Waiheke Board Riders is a water sports rental company that operates from both Oneroa and Onetangi beaches on Waiheke Island. They specialise in Stand Up Paddle Boards (SUP) but also have soft top surfboards and boogie boards as well. They give comprehensive ‘on water’ SUP lessons to individuals or small groups, or offer just basic beach instruction and let you have fun and figure it out for yourself. 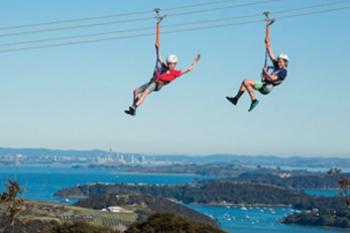 Soak up the scenery from the three giant flying fox ziplines. Fun for young and old, enjoy epic 360 degree views, soar over the bush canopy and then explore ancient NZ native forest. And if you get too worn out from all the excitement, there’s a vineyard right across the road when you can rest and refresh yourself. Pick up and drop off can be arranged from the motel. 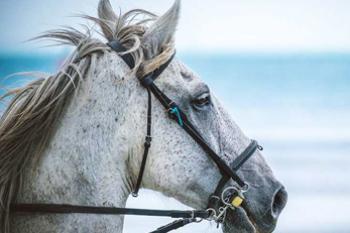 See the best the island has to offer on horseback. There are a number of companies offering horse tours, taking you through some amazing scenery, over beaches, and views at every turn. Suitable for absolute beginners through to experienced riders. Transfers from the motel can be arranged. 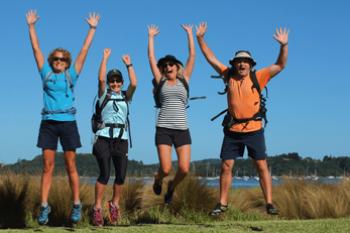 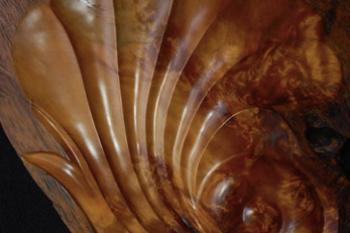 This guided tour showcases Waiheke's contemporary art scene. It takes you around vineyards, coastal waters and gets you up close to the artist in their home studio, all while feeling the wind in your hair on an electric bike.

The tour introduces you to five world renowned artists, each specialising in a different medium, including stone, kauri, painting, bronze and photography.

From $150 for 3 hours, including electric bike. A fun friendly, vibrant, diverse and interesting market space to explore the amazing offerings from the local Waiheke Community.  First established in 1975 the last 40 years have showcased and continue to profile, a huge range of local produce, wines, crafts, art and more.  With both an inside and outside space to explore these markets are a delightful way to spend your saturday mornings. We’re counting down until the April school holidays here in NZ.  Instead of battling the crazy holiday travel madness, why not hop straight on a ferry and whisk the family away for a fun-filled break at our fantastic apartments on Onetangi Beach or at our centrally located Waiheke Island Motel. Relaxing or adventuring, swimming or reading,  vineyards or mountain biking – there is no need to venture further that Waiheke Island – Everything you’d expect from an offshore holiday right in our own back yard for a fraction of the cost and stress!  Think local these holidays and take the stress of international travel off your shoulders – book now for great holiday deals! Take a breather from the more active summer months and enjoy the vibrant palette of burnt orange hues against a backdrop of clear blue skis and sparkling water.  Refreshingly cool breezes mix perfectly with the still warm temperatures and still long daylight hours.

This is a perfect time of the year for relaxing long lunches at a local vineyard or strolling along the warm beaches without the crowds but with residual summer warmth.

When:  March April & May

We loved the hotel and the reception staff were fantastic and very pleasant and helpful, she sorted out all our problems in a very sympathetic and professional manner, THANKYOU so much, we loved our stay and you made the difference, THANKYOU xx

The little assistant was so helpful and lovely. We enjoyed so much the very calm free and relaxing night. Waiheke is always the best place to spend holiday with love!!

what a great experience..the host was fantastic and made sure we had a wonderful anniversary weekend...he went out of his way which made us feel special..home away from home!!! nice 2 bedroom unit spacious comfy beds clean and tidy...awesome pool and spa close to rooms..best of all was the little convertible yay it really did put a smile on our faces..promised by our host...sad to leave can't wait to go back!!! thank you so much for everything!

will never forget the exceptional service and kindness we received, from the moment we stepped on to the property. Thank you so much for going out of your way to make sure we had a great time, when we didn't know anything about the island whatsoever. Also, our little Santa bag we got greeted with at our door on Christmas morning. Again, thank you so much, Cristina and Brad!!! I'd give this place a bajillion stars if I could!!! Cheers to Midway!!!!���

Absolutely amazing!!!! Loved this place, very comfortable and cosy but the main thing was the service was amazing. The owner was so friendly, such a lovely man as we had a five month old baby and we were to check out at 10 however our boat wasn’t leaving until 430 so he let us stay longer. When we left we were waiting to go on the ferry and he even drove down to us in a storm by the way to give our IPad as we had left Iit there. We will defiantly go back and highly recommend this place :)

Very good location. Less than 5min walk to bus stop. Situated between Oneroa and Onetangi so anywhere you want to go isnt far. Hosts were lovely. Room was just right. Had everything we needed at a great price. Was clean. Would stay again!

Christina, Rita and Kelly very friendly and helpful, unit 5 very cosy, great unit to rest up then away for the day on another adventure around Waiheke Island.

Love this place, lovely host and walking distance to shopping center etc. Love our two bedroom unit comfortable bed and everything we want and needed was provided by this place. Thank you heaps Waiheke Motel xoxo

We thoroughly enjoyed our stay at this kiwiana motel. Comfy beds, great size rooms, friendly atmosphere and central to everywhere on the island. The family hosts were amazing and create a real kiwi atmosphere with BBQ, spa, pool and their hospitality was superb. We even got to use the motels beetle convertible to check out the island. Will definitely be back.

We stayed here for 2x nights in October. Really enjoyed our stay, rooms were clean and cozy and the Owner was very friendly and helpful, let us check in early and gave us some good advice.

Friendly staff, they had no problem talking to us about the different places to visit and were helpful when we needed help. The room was clean and surprisingly spacious (had more beds than we expected) and the view was fantastic from the lounge within the room. Would definitely recommend this place if you're staying on Waiheke Island.

Stayed: May 2017, traveled with family

I will never forget the exceptional service and kindness we received, from the moment we stepped on to the property. Thank you so much for going out of your way to make sure we had a great time, when we didn't know anything about the island whatsoever. Also, our little Santa bag we got greeted with at our door on Christmas morning. Again, thank you so much, Cristina and Kelly!!! I'd give this place a bajillion stars if I could!!! Cheers to Waiheke Island Motel!!!!

My Partner and I went to Waiheke Island for a day trip. Enjoyed our day so much that we decided to stay a night. We saw a little yellow VW convertible advertising the motel and decided to try it out. Stayed in room 10. So clean, friendly staff. Countdown supermarket, RSA, close by. Lovely valley and native bush and birds...